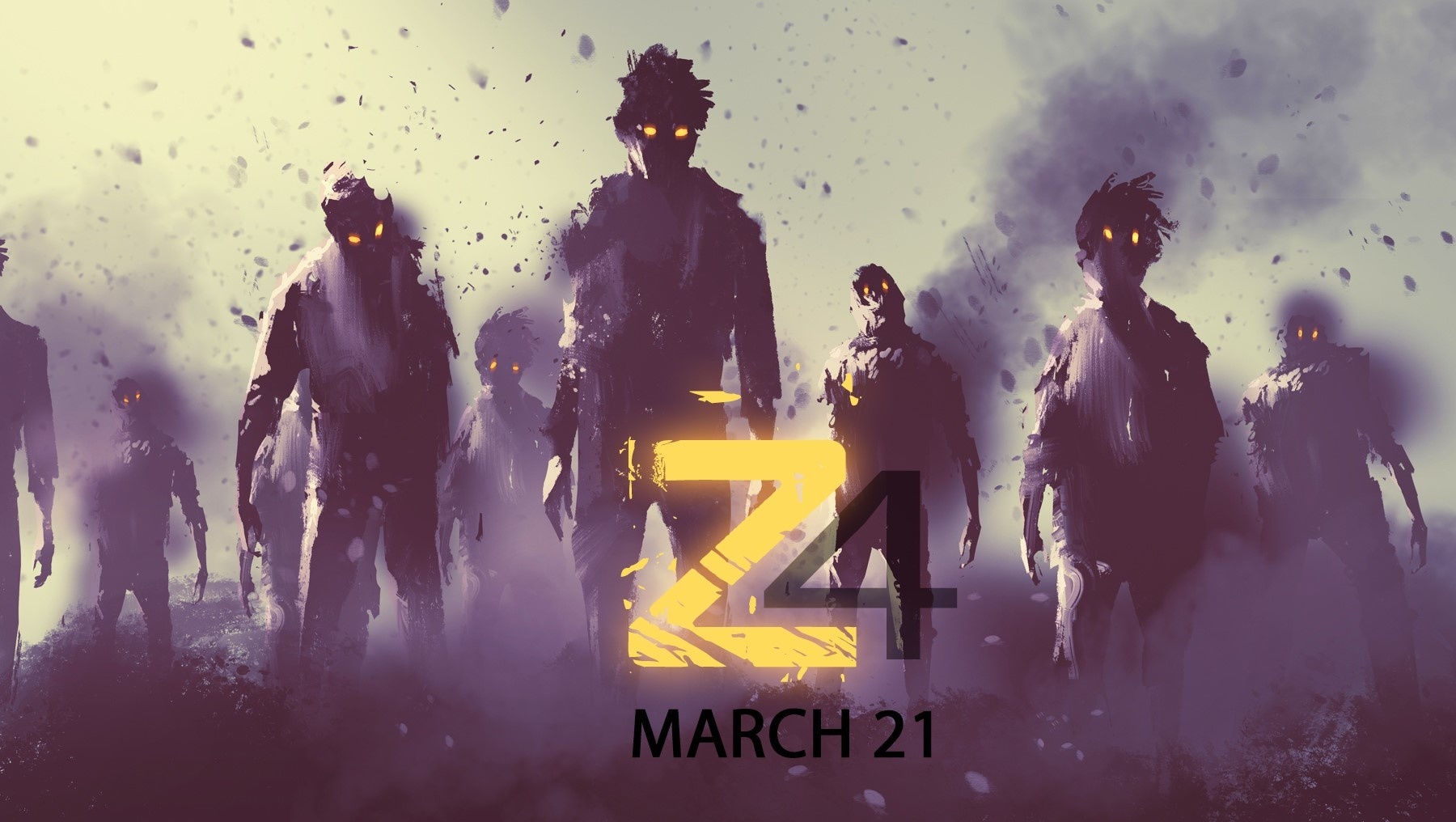 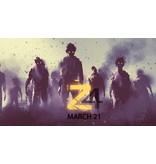 **IMPORTANT**  This is a digital product.  No ticket will be shipped.  Please select "Ticket Delivery" when asked for a shipping option to prevent shipping charges being applied to your order.  Please note, there are no refunds for event tickets unless the event is cancelled.

SURVIVORS: There are only 400 Survivor Slots available for Z. These survivors will be split into two (POSSIBLY THREE) groups (Survivor Group A and Survivor Group B) on-site the day of the event.

Survivor Registration includes a Custom PVC Z Patch, free water all day, and a raffle ticket for the Raffle.

ALL DAY ZOMBIES: There are 350 All Day Zombie slots available at $5. This is for players who want to be a part of the event and like the idea of creating panic for human players and experiencing something different in airsoft. All day zombies will receive a $30 game card, a pvc patch, and raffle ticket. This role does not allow weapons.

All Day Zombie Registration includes A Custom PVC Z Patch, free water all day, a raffle ticket for the Raffle, and a FREE Ballahack Gameplay Card valued at $30.

CAMPING: Camping onsite is allowed Friday and Saturday Night at the Field but not Sunday night. All campers must have their equipment cleaned up and back at their vehicles by 7:30 AM.

This event will only allow PISTOLS, SHOTGUNS, and BOLT-ACTION RIFLES that are shooting under 1.49 joules regardless of weight bb used. We have limited weapon use to these class of guns to ensure we can create the quality experience we desire to give the player as well as protect Zombie Role-Players.

There will be NO FULL AUTO at this event.

PISTOLS: Your pistol must be what is widely considered as a pistol. It cannot be considered and SMG (Sub-Machine Gun). Pistols CANNOT have stocks on them for this event. A pistol is allowed to have full-auto capability but CANNOT be used on full-auto.

BOLT ACTION / LEVER ACTION RIFLES: A bolt action or lever action rifle must only be able to fire one round at a time. Scopes are allowed to be used.
-ALL BOLT ACTION /LEVER ACTION RIFLES will be chronoed with .40 gram bbs to account for possible joule creep and must be under 1.49 joules (283 fps with .40s). NO ACCEPTIONS!

-TO BE CLEAR: No AEGs, SMGs, LMGs, MMGs, or Rifles (Apart from Bolt Action or Lever Action) can be used at this event.
-No winding high capacity magazines
-No Melee weapons
-No smoke or pyrotechnics
-No Grenade Launchers / 203 grenades
-No knives, blades, crow bars, axes, etc.

Thunder Bs, Tornados, and other non-pyro grenades will be allowed.

EVENT STRUCTURE
SUBJECT TO CHANGE – There may be three groups of survivors during each phase and other modifications such as issued ammo and objective changes.

1. PHASE ONE:
Phase One is two hours long. In phase one Group A Survivors will be the only ones with weapons and will be fighting Group B (Roleplaying as zombies) and the permanent voluntary Zombie Group. This is how we will achieve the overwhelming zombie horde effect. Players in Group A will be tasked with collecting supplies to ultimately build and power Safe House Bunkers while attempting to fight off zombies.

2. PHASE TWO:
Phase Two is two hours long. In phase one Group B Survivors will be the only ones with weapons and will be fighting Group A (Roleplaying as zombies) and the permanent voluntary Zombie Group. This is how we will achieve the overwhelming zombie horde effect. Players in Group A will be tasked with collecting supplies to ultimately build and power Safe House Bunkers while attempting to fight off zombies.

3. PHASE THREE:
Phase Three is three hours long. In phase three Group A Survivors and Group B survivors will have weapons and will be fighting each other and the permanent voluntary Zombie Group. Both Groups will be tasked will final activation and control of Safe House Bunkers of which there are only enough to support half of the survivors. For final “survival victory” a player must be inside a Safe House Bunker that is activated at Endex.

1. FIELD MARSHALS:
Field Marshals are the supreme authority on the field. They are present in order to maintain a safe and fun environment. Disobeying, disrespecting and/or arguing with a marshal is strictly prohibited. Field marshals must be informed of any violations of field or game rules. FIELD MARSHALS MUST BE INFORMED IMMEDIATELY OF ANY FIELD EMERGENCY SITUATIONS.

2. HIT CALLING AND GETTING DESTROYED BY ZOMBIES:
Human survivors are not fighting each other during Phases One and Two. Friendly fire will not count unless both friendly’s are engaging each other. During Phase Three if a survivor hits an enemy team survivor anywhere on their body or gear that player is dead or wounded. Gun hits and ricochets do not count. The downed player can either wait to be bandaged or return to their respawn.
Players are encouraged to aim center mass and avoid head shots when engaging zombies. When a zombie gets hit they are to drop to the ground. A zombie cannot be shot while on the ground. A downed zombie has the choice to wait one minute on the ground and then re-animate as a live zombie by standing up with their dead rag put away, or to hold their dead rag in the air, stand up, and return to spawn. A zombie without a dead rag while standing up is considered a live zombie and can be shot.
Zombies kill humans by… (We’ll let you know, but we can say it’s essentially a flag football styled system)

ALL PLAYERS MUST HAVE TWO DEAD RAGS ON THEM.

3. MEDICS:
There are no classical medics at Z. During Phases One and Two there will be no use of medical supplies. During Phase Three a medic bandage can be used on a human survivor that has been shot by the opposing survivor team. The bandage must be fully wrapped around a wounded players limb, the “medic” must then apply pressure to the bandage area for thirty seconds before removing the bandage. Once the bandage is off, the wounded player is now healed.

4. RESPAWNS:
Human Survivors will have a single fixed respawn point during each of the three phases. During Phase Three Survivor Group A and Survivor Group B will have separate respawns. Respawns are instantaneous and players are invincible while touching their spawn point. Zombies cannot go with 100 ft of a human respawn.
Zombie Role-Players will have multiple respawn points during each phase. If a Zombie chooses to not re-animate and go to a spawn point they must continue to a spawn point. Zombies are invincible at their spawns and cannot be fired upon.

5. Chrono and Minimum Engagement Distances:
All players must have marshals chronograph every weapon they use before entering gameplay. If ANY WEAPON fires 1 fps over the previously stated limit of 1.49 joules out of 5 shots the weapon will be DENIED. (PLEASE KNOW YOUR GUN, we do not like denying players but will for the safety of others)
- NO FULL AUTO PERIOD
- There is NO minimum engagement distance for weapons under 1.49 joules.

6. ZOMBIE AGRESSION
Zombies are not to have significant physical contact with other players. Situational awareness is imperative as to not step on inevitable dead bodies all over the place.

Zombies will be led by Zombie Role-player Admins. Zombies must follow general instructions given by said Admin.

Level Green: Green means zombies are essentially a slow moving, non-aggressive, “walking dead” zombie. The only threat they pose is in large numbers.

Level Yellow: Yellow means a faster paced hobble walking zombie. These zombies might kill the unaware or out of ammo survivor. A human can still outrun them.

Level Orange: Orange means a half fast walking / stumbling running zombie. It would be difficult for a human to outrun multiple Level Orange Zombies. They’re also smarter and can predict where you’re going to cut you off.

Level Red: Red means GO! Level Red Zombies have a blood lust that will not stop them from sprinting, jumping, and climbing for their prey. We’re talking “28 Days Later” or “World War Z” (The Movie) Zombies. God help you all.

Levels may be activated for the entire zombie horde simultaneously or randomly given to individual zombies to keep survivors on their feet the entire time.

Survivors: To create an immersive environment we are encouraging players to dress as civilian survivors. Plate carriers and chest rigs are allowed as is camouflage but please do not try to look like a full blown DEVCAGSIXRANGER operator. Try to look like a civilian who has acquired gear off bodies.

Zombies: Please attempt to wear neutral colors as much as possible. Avoid bright colors. Plate carriers are allowed to help with round protection but are discouraged. No weapons of any kind are allowed for zombies or for survivors during their zombie role-playing phase. If you want to go all out with makeup and fake blood then you’re awesome!

ATTITUDE:
Z is a unique experience. It requires everyone involved to see the bigger picture of creating an incredible experience you can’t get anywhere else. There are many trying situations that might arise from this game however all players are expected to comport themselves in a mature, friendly manner, even when the game gets intense. Any instances of verbal or physical aggression are grounds for immediate banning from the field.

NEW RULES WILL BE ADDED WITH REGARDS TO SPECIALIZED ZOMBIES AS WELL AS OTHER POSSIBLE CHANGES THAT MAY INCLUDE ISSUED AMMO ONLY AND SCAVAGING FOR AMMO DURING THE EVENT. STAY TUNED FOR UPDATES.